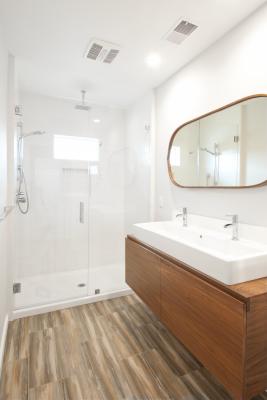 Note: you are viewing the photos from this project tagged as "Bathrooms". Click here to view all project photos.
Interiors
Exteriors
Kitchens
Bathrooms
Solo Project as Oikos
Berkeley, CA

The clients wanted a two story home large enough for their family. The existing was a modest cottage on a small lot with many constraints. If it was to be torn down and re-built, to comply to zoning regulations, it would end up even more narrow than the existing home. If a second floor was added on top, in addition to being more narrow for zoning code, it would not be able to have any windows along the sides because building codes don't allow windows that close to property lines.

The solution was to raise the existing to a second floor height and build a new open plan first floor underneath. That way the now second floor could keep the existing windows. The first floor being open gets plenty of light from the front, back,  and also by placing the stairs under the original skylight that had been in the former kitchen.

From the Dwell article:

This Berkeley couple decided to transform their 952 square foot bungalow, on a narrow 2500 square foot lot (25 feet wide by 100 feet long), by lifting their existing house to form a second story and building a new first story underneath.